Following this previous post on neural network vector embeddings for text, I wanted to experiment some more with creating embeddings for items in a dataset. As you may remember, vector embeddings are lists of numbers that represent the location of certain objects in N-dimensional space. Essentially, embeddings encode categorical data to continuous. Objects that are more similar or compatible are placed closer to each other in vector space, and the opposite for dissimilar objects. Aforementioned (cosine) similarity is rooted in co-occurrence in the data; if two items are together often, they are placed closer together. It’s kind of like a sky with stars that all have their unique location, just the sky has between 50 and 300 dimensions in this type of analysis.

As I described in my previous post, one could capture meanings of words in relation to each other by generating embeddings from words that often co-occur. This is the most prevalent application of embeddings. Yet, there are other fascinating applications of vector embeddings. For example, one could attempt to embed sales data on which items are bought together frequently, for making purchase recommendations to customers. Even more interesting; encoding people and the networks between them, based on how often they interact on social media.

Credit where credit is due; Inspiration for this post partially came from TowardsDataScience and Deep Learning with Keras by Gulli & Pal (2017).

In the current post, I’ll describe a pet project I’ve been working on recently; recreating a world map of countries from purely relational data on those countries. Here’s a summary for what I did: Firstly, I gathered some data in which some countries co-occur and others don’t. Subsequently, I generated 50-dimensional embeddings for each country with a neural network. Lastly, I applied TSNE dimension reduction to two dimensions, and plotted those dimensions on a map and to see whether they in any way resemble either a world map, or geographical / diplomatic relations between countries. Stick around until the end of the post to see whether I succeeded or not!

These are my hypotheses:

And these are all the techniques I employed in this project:

Of course, if I want to work with countries, I first need a comprehensive list of them. Here’s a United Nations .xlsx file that I found after some quick Googling: Of all the on-line country lists that I found, this one seemed the most reliable.

That file is not usable in Python yet. So, I did some manual data massaging, added respective continents to the countries, and saved it all in a .csv. This is what I ended up with: 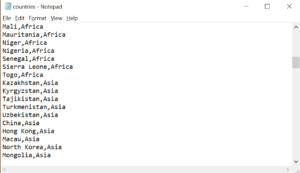 So, let’s load that info into some Python lists:

Yet, we need more data. As I mentioned before, we need a dataset in which co-occurrence of countries is represented. At first, I wanted to gather lots of news articles and extract country co-occurrence from those. I tried the New York Times API for that. I found that country combinations are quite sparse; countries are not mentioned that often. Moreover, the NYT API has quite restrictive rate limiting, rendering my data acquisition super slow.

However, I got the inspiration for better data from Will Koehrsen at Towards Data Science; Wikipedia provides a foolproof API for gathering full articles, so that web scraping is not necessary. Basically, I acquired the full Wikipedia text for every country:

Then, I filtered out only the country names for every article:

Now that we have equal length lists of both types of country combinations, we can merge them, add true / false labels, and randomize the order:

There is one last step to be taken before training the neural network. All our countries are still represented by their names. However, neural networks only take in numerical data. Therefore, I generate a lookup dictionary in which every word is represented by an index, and subsequently transform every word in the dataset to the corresponding index number:

In my previous post, I used word2vec modelling with Gensim to generate embeddings. This time around though, I wanted to know more about how the neural network that generates embeddings actually works.

I’ll provide a quick rundown. All true and false combinations are run through the model a number of times. The model has two input ports, into which the respective countries in a combination are inserted for each training iteration. Subsequently, the model takes the two appropriate embeddings for each country. Then, it computes the dot product / cosine similarity between those embeddings; essentially, each number in one embedding is multiplied by the corresponding number in the other embedding. Then, the sum of all those products is taken. If the sum is above 0, the model puts out a 1 (true combination); if the sum is under 0, it puts out a 0 (false combination). Lastly, the predicted output is compared to the actual label accompanying the country combination. Backpropagation takes place here; both embeddings are adjusted so that next time this combination comes around, the prediction will be slightly better.

At around 99% validation set accuracy, I was happy with the performance and stopped tweaking. Because Keras validation only impacts the model minimally, I didn’t bother with a test set (do use one if you’re using this type of model professionally!).  Accuracy and loss curves: Checking out the results

Now, our model is quite proficient at predicting 0s and 1s. Yet, we actually want the embeddings. Here they are, normalized and all:

Then, we need some defs for computing dot products between countries. First, a definition for cosine similarity between two countries:

Subsequently, a definition for checking the highest ranked countries for a certain country:

You can clearly see in the results that this model has captured actual relationships between countries, without any access to geographical information!

In order to make the embeddings comprehensible for our dimensionally-challenged human peanut brains, I’ll apply dimension reduction with TSNE, a popular ML method. Now, dimension reduction is not ideal, there are a few drawbacks. Firstly, although it captures quite a lot, dimension reduction of course will never be able to represent the full richness of 50-dimensional definitions in 2 dimensions. Secondly, training TSNE is a handful; underfit the model, and it will not capture any relevant information. Overfit the model, and it will start separating some of the items from the group, because that apparently decreases error. Find out more about the behaviour of TSNE with Tensorflow Embedding Projector. Yet, some fiddling with the parameters usually generates a quite nice model. Here we go:

Here’s the plot. You can clearly see some of the continents grouped together! The image is currently static. I’ll try to embed a dynamic HTML file here shortly. 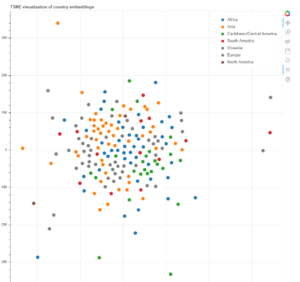 Throughout this post, we’ve seen some quite fascinating things. Time to compare them to the hypotheses:

I found this one confirmed. Both when computing dot products and looking at the visualization, one could clearly see that countries which are geographically closer together, flock together in 50-dim space as well. One could distinctly recognize continents in the 2d image. It is even possible to split Eastern and Western Europe!

Of course, it wasn’t exactly on point. Apparently, New Zealand and Australia are located in Europe 😉. However, this is to be expected from an analysis in which half of the data were randomly generated!

True! As I said before, this even caused New Zealand and Australia to be ‘located’ in Europe! The embeddings reflect diplomatic bonds only to the extend that Wikipedia actually mentions them.

Some more thoughts on vector embeddings; I find the technique a fascinating and useful tool for data science applications. I’ve used it in professional setting as well, usually in order to provide secondary neural networks with readymade object definitions. You could build both the embeddings and the other neural network layers required for a classification problem within one model. Yet, I find it convenient to have full control over embedding quality, before I start on secondary prediction.

Specifically interesting to me is the manner in which neural network embeddings generate dense, rich, continuous representations for sparse categorical data. In my analysis, only a small subset of all possible bilateral country combinations were represented, which is quite sparse. Yet, we ended up with a dense network with relationships between all countries.

To exemplify this; let’s say that Norway and Sweden are almost identical in regard to all the other countries, yet only Sweden has a relationship to Germany in our data. As a result, the relationship between Norway and Germany will be approximated according to all relations these countries have to other countries, such as Sweden. In other words, we are filling in / guessing lots of information that is not available to us, enriching our data in the process.

That’s it for today. Stay tuned for my next hobby project; reinforcement learning with Keras and PyGame!